Brain injuries can often change everything about the way you think, act and feel.

Sam’s life changed in a second, when he had a fall in 2018. In his own words he talks about his accident, his rehabilitation journey and the advice he has for others coping with brain injuries. 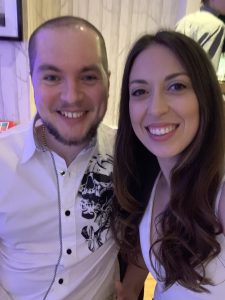 “My name is Sam, I’m 30 years old and I live in Wokingham, Berkshire. I lived a fairly normal life, married to my wonderful Wife, Grace (without whom I wouldn’t be here) I had a fairly intense job of assistant Quantity Surveyor which gave me a lot of anxiety as I had no experience or training, but that was helped by my great manager and friend, Pete and my work colleagues (family) Nick (Dad), Mary (Mum) and Matt (Brother).

“My Social life consisted of mainly going out for a drink with friends, the Cinema, Art, Drumming, Marvel/DC Superhero fandom, Music (mainly Metal and Rock), and a few other hobbies.

“I was basically happy however, all that changed in a second… Grace had gone away to Goa, India for a month to complete a course on Yoga Teaching. Within that month it was very stressful as we had our main contract to complete at work, plus we were moving to a new house both of which caused a lot of stress and anxiety. So when Grace got home I had been in the new house for 1 week and wanted to go and celebrate the new house and seeing her again.

“We went out for a nice dinner and some drinks, some turning into quite a lot. She hadn’t been drinking (luckily) and offered to take me and a couple of friends home and went off to collect the car. During this time one of my friends challenged me to a race back to the car, so we started sprinting after a short while I saw Grace ahead and realised I was racing her too. As I got closer to her I decided to spin on the spot to turn and gloat that I was beating her in a race she was unaware of, as I did I tripped on my back leg, breaking my fall for my body with my head.

“I am still unclear about what happened next, but as I understand we went to A & E, who told me I was likely mildly concussed, to go home and come back if there were any further problems. The next morning we called 111 as I had no hearing in one ear and was getting quite hot, they said I’ll be OK too. That night Grace called them again as she could tell something was wrong. We went to the local A&E department where I was given a CT scan of my brain, and promptly moved from the waiting area to majors.  We were given the news that there was significant damage to my brain and I was transferred to the John Radcliffe Hospital in Oxford by the following afternoon. It took a few days for my brain injury to flourish but I was eventually put in a coma for a week, and when I woke up discovered I was missing the front part of my skull from eyebrow to top of head and ear to ear. I remember being very angry while in hospital which I was in for around 9 weeks.”

“My advice from my own experience to people that know someone with brain injury, just stay in contact with them and basically treat them as normal”

“The anger was strange as it was anger no matter what feeling it should have been e.g. sadness, happiness etc… The injury at first affected my ability to walk as it was affecting my balance and my psychology was also affected to the point I wanted to go up to the roof and jump.”

It took Sam time to adjust to what had happened, and the effects it would have on his life. With support from Headway Thames Valley and Berkshire Healthcare, he began his rehabilitation journey.

“I received really good physiotherapy from the John Radcliffe Hospital and Royal Berkshire Hospital, and also psychotherapy through CBNRT who, respectively, helped me to walk again and cope with all the pessimistic and horrible thoughts. I was referred to Headway Thames Valley – the brain injury charity, who had put together a group for people living with Brain Injury.”

“This group along with the amazing Headway Thames Valley team, such as the Manager, Jamie and Bob, an Occupational Therapist who has specialised in brain injury for over 30 years, was the most incredible thing for me to help get back to normal, not just because of all the advice and activities presented by them but also by knowing and befriending others in a similar state to me. It was that point which I no longer felt alone in the world, that I wasn’t the only one going through this, and actually there are some people worse off than me.”

Part of life after a brain injury is learning to do the usual day to day things slightly differently, but Sam is quick to point out that it shouldn’t stop you from achieving what you want to achieve.

“Since then I’ve received my new Titanium skull which I am actually proud of having, it shows (with a huge scar) that I have been through Hell but come back fighting. And like a Phoenix have maybe come back with a better life than before. Though I am still unable to drive or enjoy a drink and have some medication to carry on taking for a while, every cloud does in fact have a silver lining, I am physically stronger than I have ever been, as my amazing trainer, Max showed me the proper technique in lifting weights while at my long term health and fitness gym which I am so happy about. I also now have my own office at work as I do still find it difficult to concentrate, let alone with other people around me.”

“One more thing I am now trying to do is rekindle my relationships with friends, as I have found out I wasn’t communicated with as people were unaware that I wanted to see them, this made me feel very low but now I realise they didn’t not want to see me they were just worried. My advice from my own experience to people that know someone with brain injury, just stay in contact with them and basically treat them as normal, help spread the understanding of Brain Injury as Headway Thames Valley are doing!”

Living with a brain injury has been challenging, but Sam says it’s important to stay strong and positive.

“To the people with a Brain Injury, stay positive. I can’t think of anything better to advise than that, from my experience I promise it’s not all dark clouds!

“Lastly just a massive thanks to everyone at Headway Thames Valley and Berkshire Healthcare for what you have done for me, you will forever hold a place in my heart (and head) and I will continue to feel good and for as long as I am I will raise money to help you aid others as well as you have done me!”

Thank you for sharing your powerful story, Sam.