Richard has been a Headway Thames Valley client since 2015. Here, he shares his inspiring story of life after brain injury.

My name is Richard. I’m 43 years old and live in Bracknell.

Life before my brain injury was fairly normal. Lived with my girlfriend (now wife), worked at the airport in Cargo and would go out and socialise with friends for dinner or the cinema. I also loved fishing.

My injury, so to speak, all started in 2007. I had my first brain haemorrhage. This took 3 months to recover from. They told me it was a cavernoma in my cerebellum and that it was just unlucky that it burst and hopefully I’ll recover fully and it won’t happen again but 2 years later it did. Again, taking 3-4 months to recover from. Not being able to work throughout that time. Being sick. Laying on the sofa and sleeping. My balance was also affected. I had 2 more bleeds over the next few years after this, so after a long chat with my surgeon, wife and family I decided to have an operation to remove the cavernoma. It was a risky operation due to where it was but we decided we would rather deal with the outcome of the operation rather than never know when I might have another bleed and how bad it would affect me. 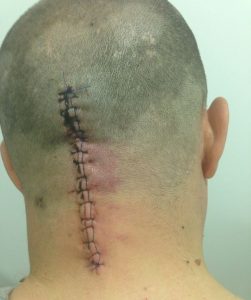 The operation initially went well. I was in hospital for about 2 weeks. I came out with some sight and balance issues and needed to recover, as before with the bleeds, by lying on the sofa and sleeping a lot. I took a turn for the worst a week later where I had a CSF (cerebrospinal fluid) leak. My spinal fluid was leaking out through the wound in my skull. This made me really ill and I ended up back in hospital for another few weeks. I lost 2 days memory and needed a lumber puncture. I then needed another operation to have a VP (Ventriculoperitoneal) shunt. Having this shunt has put my recovery back and I think this is the cause of a lot of my issues but without it I wouldn’t survive.

I spent 18 months pretty much not being able to do anything but lay on the sofa. I could only lie on one side or I’d be sick. Standing up made me feel sick and I struggled with my balance so much so that I fell over and broke my wrist. Because I live in Berkshire and my operation was at the John Radcliffe Hospital in Oxford, I feel I got lost in the system and it wasn’t until I got in touch with Headway Thames Valley that my recovery started to improve as I had now found the right people that could help me.

Headway Thames Valley made me feel that I was not alone and put me in contact with others going through similar situations.

I started physiotherapy to help with my walking and balance. Bob at Headway Thames Valley knew my therapist and would often go and see her to see how he could help me further. Carol, from Headway Thames Valley also started coming to my house on a weekly basis. Over the weeks she helped me with practical issues such as making a sandwich, holding a knife properly and other day to day skills. If I was having a good day we would try a short walk round my cul-de-sac.

A combination of the physio and seeing Carol were what I found most beneficial and when I noticed a real improvement.

Once I felt I was well enough to mobilise I joined the Headway Thames Valley support group meetings in Bracknell. These are roughly every 6-8 weeks and I have found them to be very beneficial in helping me integrate back into society and the local community. Before these meetings I didn’t feel comfortable leaving the house and would hide away. I lost my confidence and didn’t feel ‘normal’. Headway Thames Valley has been the most help out of all the organisations I have come across and available to me.

I am still recovering and seeing other specialists but feel I would not be as far forward as I am today without Headway’s help. My family and I are extremely grateful to them. Hopefully I will continue to improve.

Thank you for sharing, Richard!

Richard has made a lot of progress since his brain injury and hopes that his story can help other people who may be in a similar situation to him.