The London Marathon 2016 was on Sunday 24 April and Emile Foyster took part to raise money for Headway Thames Valley. 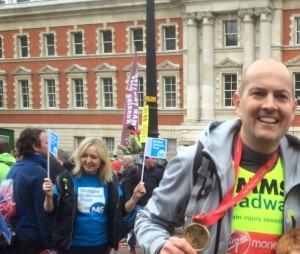 Emile with his well deserved medal

Before his huge challenge, Emile said;

“I am raising money for Headway, a charity which has helped my sister, Gisela Blackburn, who suffered a brain injury when she was knocked off her bike during a charity event in 2015.

“Although her physical injuries (broken vertabrae, cuts and bruises) seemed the biggest problem for her immediately following the accident, more lasting issues have resulted from a brain injury caused by head trauma as a result of the crash.

“Headway, specifically the Headway Thames Valley branch, have provided valuable care and guidance for Gi in her continuing recovery. In choosing Headway I hope to in part repay some of the people who have been helping Gi and others and bring some attention to one of the lesser known charities.”

Despite his stumble, Emile went on to complete the marathon in a fantastic time of 3 hours, 29 minutes and 21 seconds and Gi was there, cheering him on;

“Emile said that he was feeling down as he had missed seeing us at the Headway check point at the Cutty Sark, as we could not get to the stand. We then went through the pedestrian tunnel under the Thames to Isle of Dogs and we saw him there at the 16.5 mile mark.

“He said his legs thought that he had finished the race when he stopped to hug me, having said he was so massively uplifted by seeing me with Martyn and my sister cheering him on that he push on even harder and managed to get that awesome time.

“I have been in tears on an off since seeing him on the run as it has made me so emotional and I feel it is such a great achievement done in my honour from my brother to me, but also for all the people who may suffer with brain injuries all over the country.  Hopefully the funds he raised should help keep such a great charity going.”

Gi was so inspired by her brother’s efforts that she is targeting a place in next year’s London Marathon herself!

Everyone at Headway Thames Valley would like to say a huge thank you to Emile, who has so far raised over £1500 to be split between our charity and Headway UK.