On Saturday 18 July a group of school friends are cycling from Wokingham to Paris in aid of the charity that helped rehabilitate their friend, Jamie who was attacked on a night out. 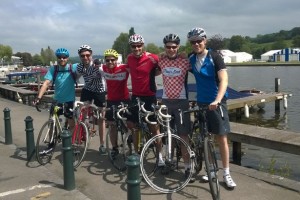 Some of the team in Henley, whilst training for the challenge.

Jamie has spent the last three years in recovery from a brain injury suffered in an assault in Reading town centre in 2012. He was left with permanent brain damage which causes memory loss, fatigue, dizziness, loss of taste and smell and recurring anxiety.

Some of the group ran the Reading Half Marathon for Headway last year but this year it will be extra special as Jamie will be able to take part in what will be a huge challenge for them all, but him in particular.

The ride will span across 3 days and totals over 200 miles and will see the group travel from Wokingham to Newhaven and Dieppe to Paris. They have been extensively training since the turn of the year and much of the time from now until the event will be spent training on the road.

Jamie says Headway Thames Valley provided him with outstanding support following the injury and without their help he would not have been able to make the brilliant progress that he has made so far. Jamie was initially told that he would not be able to work again, but he now works for the charity helping others in their recovery.

Any donation, large or small, will be greatly appreciated and will enable Headway to continue providing invaluable support to those suffering from long term brain injuries.